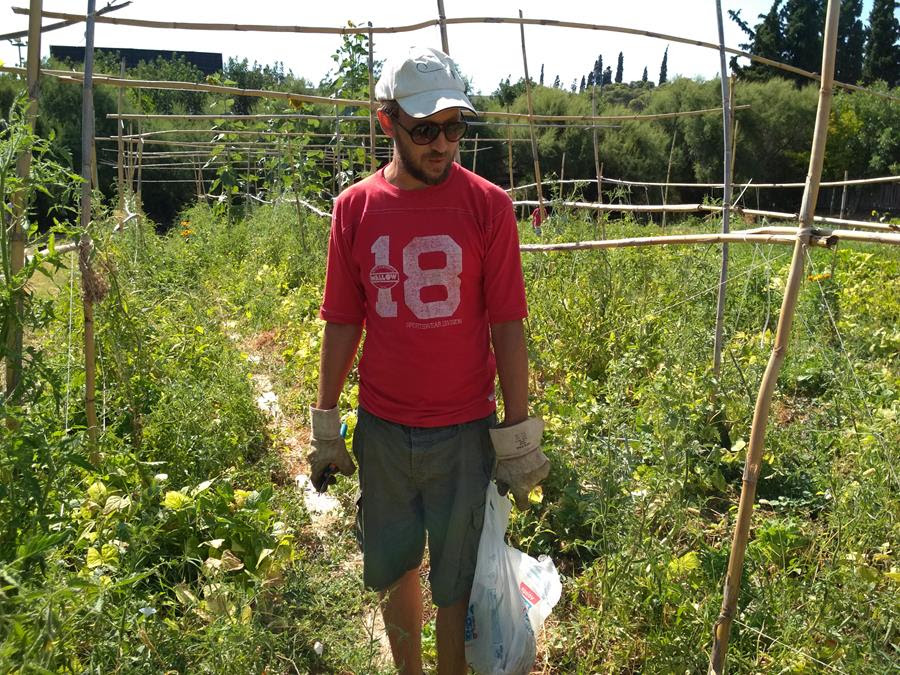 Put yourself in Greek shoes for a moment – if you were sitting at a café table sipping coffee with five good friends, up to three of you would be unemployed, meanwhile the remaining three would have had your wages cut by a third and taxes increased.  Four of you would be behind on your mortgages or have moved back home with your parents and at least two of you would have lost access to the collapsing free healthcare system. It’s pretty bloody dire.

I’m in Athens visiting Organization Earth, an NGO growing fresh produce for food banks and running young farmer training courses (that’s them in the pic).  Farm manager, George Xepapadakos, a investigative journalist laid-off in the crisis, makes the observation, “In the 1970’s we grew 80% of our own food.  Then we modernised and over a million people moved to the cities. Today we grow 20% of our own food, over a million people are unemployed and now creditors own our country. Does that strike you as progress?”

With no jobs in the city a kind of return migration has begun. Thousands of well-educated 20 somethings are going back to farm on their parent’s or grandparent’s land.  In 2009 8,600 first time farmers registered for EU subsidies, this year the number was over 15,000.  And with the return of food-savvy youngsters to family farms a new wave of Greek products have started flowing back to the cities.

Melina Taprantzi from WISE, a social enterprise distributing some very happening Greek food throughout Europe, observes, “For decades we didn’t appreciate our own food. To be honest I think we were a little embarrassed.”  Melina works with young farmers to come up with high-end organic food products from traditional Greek produce like olives, honey, herbs and grapes with all the profits going to fund a local food bank.

Meanwhile for mainstream farmers and everyday people there’s been a shift in the food system.  Starting in 2011 in the little northern Greek town of Katerini, a local community group organised struggling farmers to sell their potatoes direct to the public at one-third of the retail price. A few days later, on a university campus in the city of Thessaloniki, student volunteers hoping to help farmers sell 3 tons of potatoes moved 50 tons in a single day!

Without any formal leadership, an office or a glitzy multi-channel launch the idea spread fast and potato prices, which had been rising, fell by 25% in a year.  The media dubbed it The Potato Movement. And it didn’t take long for the focus to widen to include other foods and even basic medicines.  Renamed the No Middleman Movement, cash strapped Greeks were turning up to pop-up No Middleman markets in schools, car parks and squares all over Greece.  And as it grew the Movement spawned free community health clinics, community kitchens and a tradition of putting aside a small percentage of the food to give free to families doing it extra tough.

They say no good deed goes unpunished and it seems to apply doubly in Greece; rather than fostering a community based movement that supported so many farmers and fed so many people, the government, under pressure from the wholesale industry and supermarkets, passed laws in 2014 making it illegal for No Middleman markets to operate.  Offending organisers and farmers were subsequently fined for trespass.

Some groups went underground while others, demoralised and exhausted by years of volunteering, went into hibernation.  Yet other groups were embraced by progressive local councils and the food kept getting through.  On April 14th this year, out of a warehouse car park, Athens based organisation Solidarity for All distributed eighty-four tonnes of food including tomatoes, rice, pasta, long-life milk, sunflower oil, flour, potatoes and kiwi to 126 food cooperatives.  They also say where there’s a will there’s a way.

We’re very excited about The Backyard Harvest Festival  happening this November in Darebin and for the first time in Moreland. It’s like an open garden scheme for people who grow their own food.

We’re mentioning it early so if you’re interested in opening your garden or volunteering you can get in touch now – here’s the link. And if you like the idea and live in another council area point it out to your local councillor – they’re always looking for positive ways to engage.