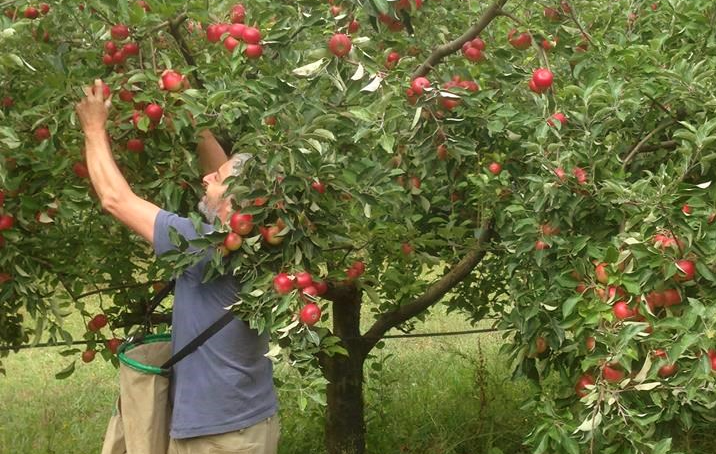 Meanwhile down on Hazeldean Forest Farm

Jason Alexandra is just back from a ute-ride around the farm checking on quince, persimmons and the last few fuji and jonagold left to ripen on the trees.

Jason (that’s him enveloped by fruit above) reckons there’s just one more day of picking before they say goodbye to the crew of two backpackers and four locals who started harvest way back in the last week of January.

It’s been an above average year, though the dam is right down from the extra irrigation the orchards have needed.  Jason says it’s been so dry and that without watering the apples would’ve been golf ball sized.

Jason says the pick of their fruit at the moment are the golden dels and jonagolds (we’ve got lots of both of them at Fair Food at the moment). One of the things I love about getting apples from Hazeldean Forest Farm are the reusable plastic crates we swap back and forth  instead of using new cardboard boxes every time.

Over the Australia Day Weekend nerves were tested at Hazeldean when a bush-fire came through the Strezlecki ranges to within a kilometre of the farm.   Watching the fleet of firetrucks and five helicopters heading the fire off over the following three weeks made Jason feel very glad about the taxes he paid.

Jason and Marg Alexandra are organic pioneers – over four decades they’ve lent their hands and brains to so many projects but the constant during their busy lives has been Hazeldean Forest Farm.

Their orchard, which includes 30 varieties of heritage and cider apples, chestnuts, walnuts, persimmons, peaches, nashis & plums, has been certified organic now for over 30 years.

And the orchard is just one element of an agroecological property that includes carefully placed windbreaks, fodder and timber trees around a four acre dam providing habitat for numerous species of bats & birds that work as natural pest controllers.

If you want to see more check out the beautiful video Jason and Marg made with the Victorian Farmers Market Association. 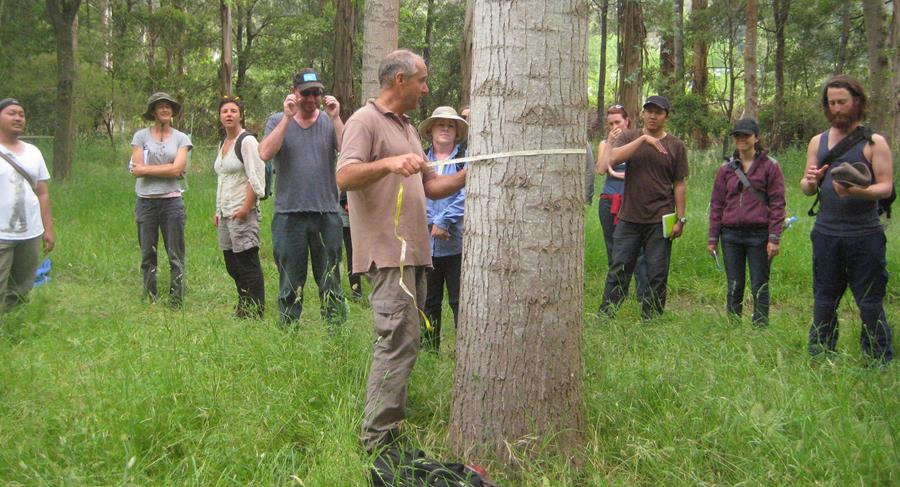 A couple of months ago I wrote about CERES Fair Wood – a social enterprise which sells timber sourced from agro-foresters and indigenous-owned saw-millers to green builders and landscapers.

We believe instead of importing timber that displaces indigenous peoples, endangers  species, pollutes rivers and contributes to climate change that we can source sustainably grown timber that provides habitat, protects waterways, mitigates climate change and generates income for local farmers and indigenous communities.

Anyway, this Thursday 26th April, 6pm at The Preston Markets, Darebin Council are holding Darebin Pitch IT,  a kind of community Shark Tank supporting “new and exciting sustainability-focused ventures.”  CERES Fair Wood is one of five finalists selected to pitch for $20,000 in start-up funding.

It’s a night of food, entertainment and some of Melbourne’s most dynamic and varied new enterprises.

And in case you were wondering – the answer is yes, we’ll be delivering as usual this coming Wednesday ANZAC Day.