A seat at EAT’s table

On Friday night I went to the “EAT-Lancet Commission on healthy diets from sustainable food systems.” launch, one of 35 world-wide. It’s fascinating reading; a three year, multi-disciplinary, game-changing study outlining strategies on how to provide 10 billion of us with a healthy diet that reduces greenhouse emissions, saves half the planet for nature, halves food waste all guided by the UN’s Sustainable Development Goals.  EAT calls it “The Great Food Transformation”.

There was a palpable buzz around the Old Meat Market in North Melbourne; hundreds of people eating and drinking the best in socially and environmentally sourced food and wine looking forward to a festival featuring two days of talks and workshops with the leading lights of regenerative agriculture, food rescue and green politics.

But then something strange happened.

Keynote Fabrice DeClerck, EAT’s chief science officer, took the stage to frame the challenges humanity is currently facing; climate change, ecological collapse, famine, obesity etc, etc – it was a sobering picture.   But then Fabrice switched to talking up The Green Revolution of the 1960’s & 70’s and how the technology it spread across the world saved millions from starvation. He announced that today, in this time of crisis, we needed a new Green Revolution.

My mind whirred, “The Green Revolution; wasn’t that when Big Ag got farmers in Mexico, India and Indonesia to adopt hybrid seeds, artificial fertilisers and chemical sprays? And aren’t we, in the midst of this terrible drought, trying to turn around the massive land degradation, loss of biodiversity, farmer indebtedness and lack of resilience on our farms caused by Green Revolution industrial agriculture? Hmmmmm?

Next up Professor Martin Coles from the CSIRO begins to talk about the opportunities that await Australian agriculture and lauds the breakthrough CSIRO’s scientist’s have made inserting genes from algae into canola so we can now “grow fish oil on land!”  A murmur riffles across the audience as if to say, “Huh al-gola? Aren’t we against GMO’s?”

The following speaker, Sean de Cleene, strides confidently across the stage, casually mentioning how different this gathering is to his usual gigs at the World Economic Forum in Davos.

“Davos! The WEF – WTF!?” Sean de Cleene is Head of Food System Initiative at the World Economic Forum, but he also spent nine years as an executive at Yara International, the world’s largest artificial fertiliser company.

The EAT-Lancet report says it is neutral on farming methods but recommends raising levels of synthetic nitrogen applied to African farms – something it describes as “sustainable intensification”.

EAT’s also established a group called FReSH (Food Reform for Sustainability and Health) it describes as “an effort to drive the transformation of the food system….”  Yara International is a partner along with thirty-nine of the world’s largest food, drug and chemical companies (they’re all up in the picture above).

Right about now I wonder what Tammi Jonas from the Australian Food Sovereignty Network is thinking about all this?  I turn around only to see her empty seat.

The final speaker, Professor David Nabarro, comes on to wrap up the report. Nabarro’s a UN legend; he’s just won the World Food Prize 2018 (dubbed Nobel Prize for Agriculture) for cutting the number of stunted children in the world by 10 million. 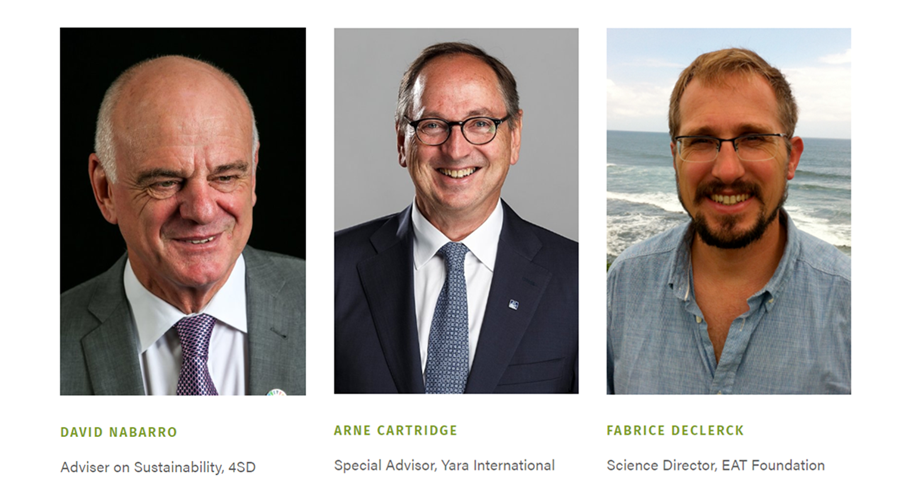 Among his many roles Nabarro is a core partner on the Big Ag-friendly Food and Land Use Coalition  website, along with opening speaker EAT chief science officer, Fabrice DeClerck, and Arne Cartridge, from Yara International Fertilisers – that’s them above.

This is not a conspiracy piece; nothing I’ve found is hidden from public view.  This sadly seems to be the way big business and big governance partner together. Nabarro’s 2013 visit to Yara International is pretty instructive – Yara International President, Jørgen Haslestad lays it out saying….

…“It is important that official representatives at the level of Nabarro understand Yara’s strategy and way of operating in the market, as he is Secretary-General Ban Ki-Moon’s voice on food security and how the private industry should engage to eliminate hunger…”

It’s no surprise that Big Food, Pharma and Chemical are actively participating in policy development with government, international institutions and NGO’s.  After all they have businesses to protect and grow.

I leave the Old Meat Market with mixed feelings, still inspired by parts of this report, but mostly disappointed that not all of the food-system players get to sit at the EAT-Lancet table.

The next day I find Food sovereignty elder, Vandana Shiva’s summing up EAT-Lancet, “The report”, she says, “wants a shift to healthy diets without a shift in the chemical agriculture paradigm…”