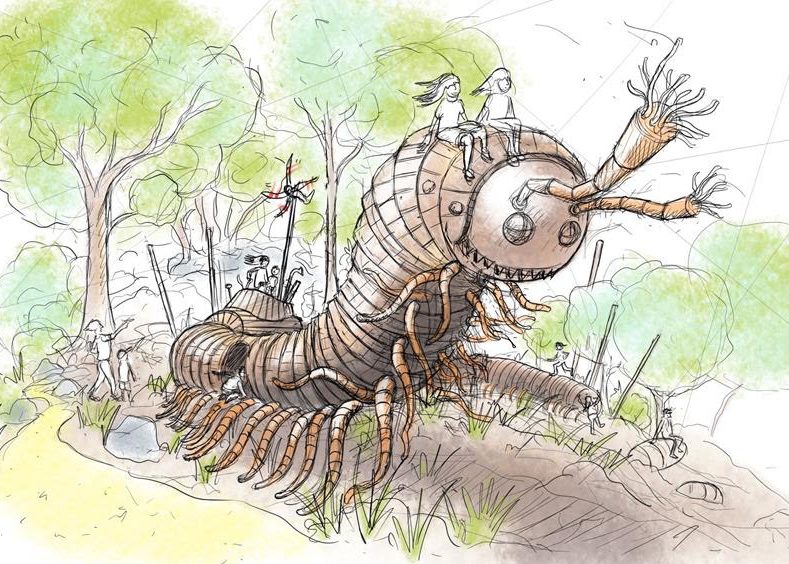 This time last year the Ceres Recycled Electric Kinetic Playspace got a guernsey in the Pick My Project competition.

Inspired by a chaotically beautiful community-built playground at the St Louis Museum, the Ceres Playspace was workshopped into existence with groups of local kids – often employing giant native insects loaned from Melbourne Museum as conversation starters.

A team of playground builders and designers led by project manager, Nick Curmi, (we have some serious playground talent in this town) coalesced around a sketch plan to carefully shepherd the Playspace through a myriad of design and regulatory challenges.

Drawing on Ceres’ history, with nods to our past as a quarry and a tip, the final design was brought to life in industrial artist, Steve Mushin’s beautiful illustrations (that’s them above and below).

A theme of renewal and regeneration of the soil that sustains us permeates the Playspace – children enter into a microscopic world made-gigantic – of millipedes, worms, cocoons even bacteria, all to actual scale.

Seeing giant millipede body parts in a huge hand-riveted boiler and tunnels in the stanchions of an old crane – Curmi was in his absolute happy place.

With the help of dozens of volunteers building begins this Spring, and like the Ceres Meditation Garden the Playspace will be a project put together by the hands of our community.

Big thanks from Ashley for sending this in…..

This is Ashley, your happy Food Host in Hoppers Crossing.  I wanted to share some information with you that I think is very important.  I have also begun sharing it with our customers here in HC.

It is about the Redcycle program which I recently found out about and has dramatically decreased our families waste. Redcycle recycles/upcycles soft plastics.  Soft plastics such as sandwich bags, chip packets, snack bar packets, postal wrapping etc. (the list is extensive).

I realise that what NEEDS to happen is that plastic production gets eliminated altogether, but until it does, this company is doing something great with our otherwise unrecyclable plastics.

The manufacturing plant that repurposes the plastics is located right here in Melbourne!

Please forgive me if this is old news to you.  I am astounded though by how many people do not know about this!!!