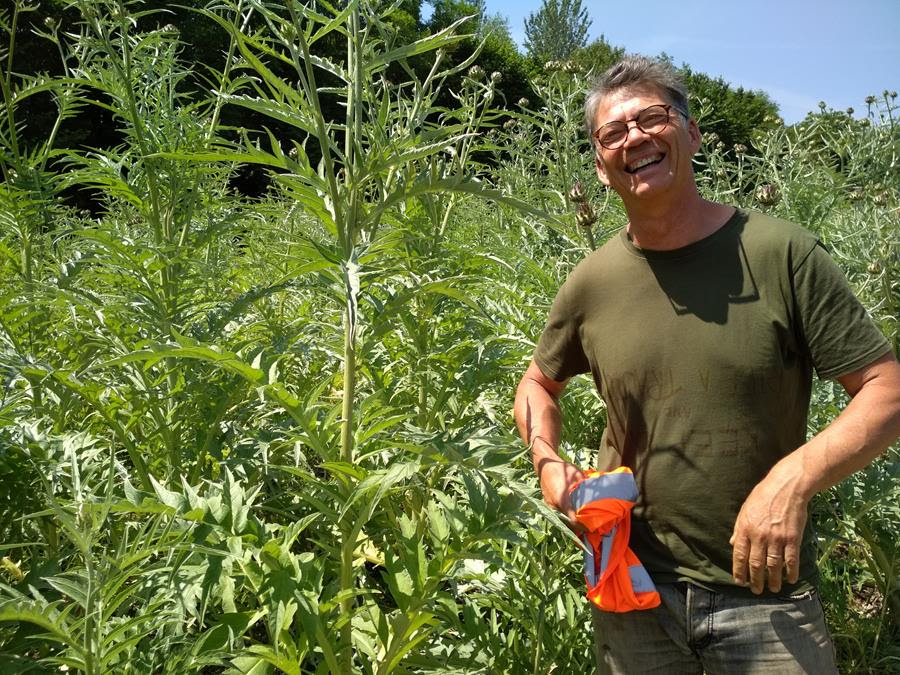 Guy Watson is at one with vegetables

He’s been BBC’s farmer of the year, his veggie box scheme won Ethical Product of the Decade as well as just about every other organic retail and farming award going.  As a speaker and leader he’s much in demand, but I get the feeling as we bomb down the impossibly narrow lane ways of his Devon farm looking for artichokes in a beat-up ute, this is where Riverford Organic’s Guy Watson is most at home.

Guy Watson’s a bit of a serial vegetable monogamist; he’s had love affairs with puntarelle (a chunky stemmed chicory), there was a dalliance with Peruvian oca and he even had a thing going with cime di rapa (a favourite of ours down at Joe’s Market Garden).  At the moment it’s cardoons (artichoke stems kind of like a feral celery) that are the object of his affection. “I really love bitter vegetables and these really love growing here” he says fondly stroking one of his tall silvery green plants.

It’s all been part of Guy Watson’s mission encouraging people to join him on his extraordinary vegetable journey that started back in 1986. Guy began growing organic vegetables after a lack of capitalistic enthusiasm cost him his management consulting job. Returning home to his family’s property in Devon his dad lent him three acres to start farming.

Six years later, sick of being repeatedly screwed down on price by supermarkets, Guy set up a veggie box scheme delivering to 30 local friends and families.  People caught onto his passion for putting vegetables grown for taste at the centre of their meals and soon he had recruited five neighbouring growers to keep up with demand. Today Guy’s “little” organic veggie box scheme delivers around 47,000 veg boxes a week across the UK.

Of course the story is not as simple as that, Guy says one of the best things he did was bring on people who knew how to run businesses. Riverford has a management team who look after the operations, which is later demonstrated as we wander around Riverford’s new $3 million state of the art packing warehouse. Coming across a lab-like clean-room for packing dry goods Guy confesses, “I’ve never actually been in here.”

But later over lunch with Guy and his dad, John (we ate artichokes of course) it’s clear the power of ideas and keeping Riverford true to itself are far more important than sales per labour hour or customer acquisition costs.  Guy’s current focus has turned to workplace equality and ownership. “We want to sell the business to Riverford’s workers” he explains.  He has previously vowed that the venture capitalists who come weekly with offers of a “comfortable managed exit” will never be for him.

The challenge however of transferring control of a $75 million business to its workers is enormous, but as ever the details don’t seem important to Guy.  And looking out over his field of cardoons that he concedes may be another veggie experiment that ends up on the compost heap, you know that succeed or fail here’s a man who has never been afraid to take a chance on something he believes in his bones to be right.

Angela has been a Fair Food customer for more than three years and is excited to be be our first Food Host in Reservoir.

Being a Food Host Angela hopes to be able to teach her son more about where their food comes from and reduce her food miles.

Angela is on Wilkinson Street, Reservoir, and will be open Wednesdays between 5pm and 7.30pm.  So please spread the word and tell your Rezzie friends.

And also don’t forget this Saturday August 5th you are invited to visit our wonderful Joe’s Market Garden Coburg on the banks of the Merri Creek.  CERES farmers Emily Connors and Monique Miller are giving  a tour and talk  about it’s 150 year history as well as what’s happening at Joe’s now.