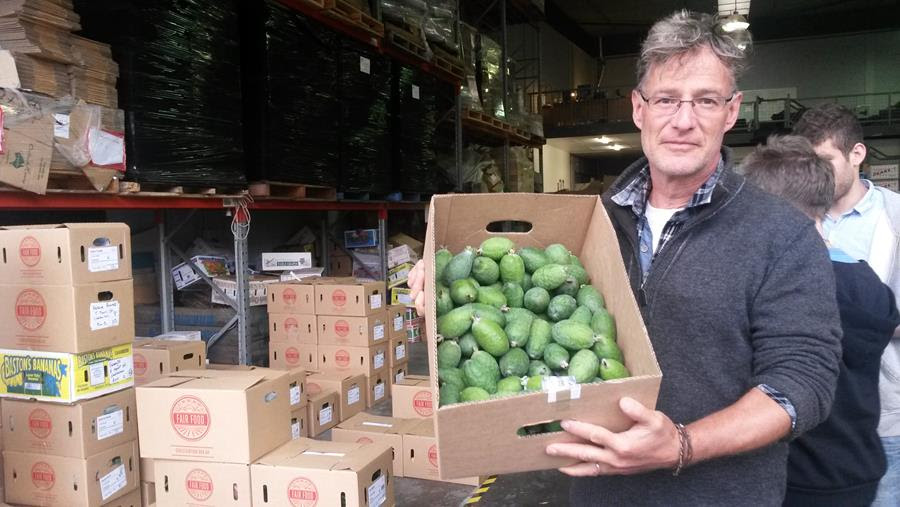 I realised my love for feijoas (aka pineapple guavas) was getting out of hand when our friend, Meg, pointed out I had planted 13 feijoa trees around our house.

“That many”, Meg reconfirmed firmly.

Feijoa are guavas and have a flavour and texture all of their own – reminiscent perhaps of pineapples, quince, strawberries and pears and yet at the same time completely a thing of their own.

Part of the flowering myrtle family (including eucalyptus) feijoas were introduced from Brazil to Australia and New Zealand in the 1920s.

Here feijoas faded into obscurity but over the Tasman it captured the national fruit growing imagination.

By the seventies almost every backyard in the country boasted at least one feijoa tree with some going so far as to plant feijoa hedges.

The ubiquity of the feijoa coupled with a short & abundant harvest means that during April New Zealanders are flooded by a deluge of the dull-green, egg-shaped fruits.

And it’s during this time that a national feijoa commons complete with it’s own informal economy comes into being.

Traditionally gathered in used shopping bags, feijoas are transported from tree to hang at front gates, neighbours’ doorsteps or relative’s kitchen tables where teaspoons are drawn for a nationwide feijoa eating frenzy.

And although these days feijoas are the flavour-of-the-month in trendy drinks, lollies and high-end deserts, it’s the sharing culture that’s completely indivisible from the fruit which drives kiwis’ feijoa fondness.

Meanwhile, here in Melbourne the mere mention of them on Fair Food’s social media feed prompts feverish feijoa sharing among the local kiwi diaspora, desperately pining for a fleeting, if slightly gritty, taste of home.

For the next few weeks Fair Food has a limited supply of Paul Haar’s feijoas (that’s Paul above).  If you miss out this week keep trying and you will get a bag.

And better still plant your own tree or thirteen – you can find them at CERES Nursery and places that sell interesting fruit trees.

From this week both of our newest food hosts, Tara (left) and Tina (right) will be up & running and ready to share their verandahs with their ethical grocery-lovin, free-delivery enjoying neighbours!

Get the low-down below;