Alex and I have been searching for local coffee roasters who have a strong connection to coffee growers. This week we drank a lot of coffee and talked a lot about coffee and learned a bit about the coffee trade in East Timor. Bec and Nikki from Wild Timor Coffee and Linda fromWithOneBean came to the Fair Food warehouse to share their stories with us.  I’ve talked a bit about these two projects that were both recommended by Fair Food customers – we agree and think their work is spot on. The first thing that struck us was that all of Timor’s coffee is organic; coffee mostly grows wild and people can’t afford fertilisers or sprays.  The other thing is that although the scale of the trade in Timor is quite large, (it’s the country’s largest commodity export and provides an income for about a quarter of the Timorese population), at the village level most families only earn a couple of hundred dollars or so a year from coffee.

The bottom line is that East Timor is poor, really poor, so poor they a have a time each year called “the hungry months.” The closest most of us in Australia get to this is the time after lunch until we get home to see what’s in the fridge.  Both these projects work directly with their growers and return profits to their communities as well as implementing coffee training, processing, water supply, reafforestation and social projects.  We’re proud to be selling both coffees and look forward to talking more about them.

There’s also been a fortuitous connection with our food host in North Melbourne, The Auction Rooms.  Andrew Kelly who runs Auction Rooms’ roasting business Small Batch has been filling us in on their direct trade relationship with Didier Pajoy, an organic Columbian coffee grower. 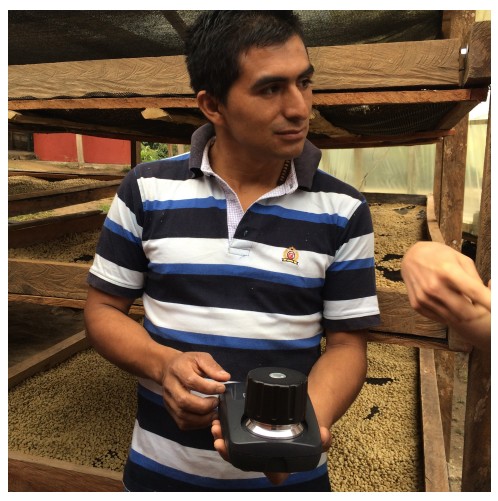 When Andrew from Small Batch met Didier (that’s him on the left) he was so frustrated with the low prices he was considering getting out of coffee cultivation.  Andrew tried some of Didier’s coffee and offered him a premium for his beans on the spot. This is what Andrew writes about the way Didier farms;

Didier has massively embraced pretty much self-taught organic practices and has banded together a group of producers in the area, sharing knowledge and supporting each other’s organic endeavours. He makes a compost tea out of wood ash, milk, sugar cane pulp and soil bacteria from the highest part of the nearby landscape and applies it as a foliar spray which has had remarkable results as a prevention from the effects of the sometimes devastating disease effecting the caturra varietal – La Roya. He has supremely healthy plants also because instead of planting them at the highest density possible, he has spaced them out to allow each tree to get the nutrients from the soil it needs.

Small Batch take a direct trade approach: they concentrate on buying high quality coffee produced sustainably and pay their growers twice the FairTrade rate and some higher still for the best beans.  Andrew’s belief is that the best way he can help small producers is by talking directly to them about cupping, sustainable coffee growing and part-paying up front so producers can grow better coffee and demand a better price.

You can now buy Wild Timor Coffee here and WithOneBean Coffee here.  We’re expecting to have some of Didier Pajoy’s coffee from Small Batch in our webshop in the next week or two.  And the other wonderful thing with our new coffees is they’ll be fresh roasted to order every week.