Last week we were up on the Murray River near Renmark looking at an incredibly bright night sky.  My wife was showing her Uncle John the dark emu, a sort of unconstellation that exists in the negative space of the milky way (something as familiar to Aboriginal culture as the Shopping Trolley aka Orion’s Belt is to Europeans).  After some looking and with a  “Hey, oh yeah!”  Uncle John finally saw it, and now he’s seen it, he’ll never be able to unsee it.

Travelling by boat up the immensely wide Murray passing through wetlands and river red gum forests it’s easy to believe you are in the middle of a giant wilderness, however when we walked a little way away from the river it’ wasn’t long before we found ourselves in endless wheat fields or bare cattle pastures.  And there regularly dotted along the river, like huge black drinking straws,were pumping stations drawing out water for irrigation. I took a look from above on Google Earth and our farms had cleared as close to the river as they could leaving only where it flooded regularly.

The pressure on the river’s water for agriculture is intense; the Murray Darling basin produces nearly 40% of our food.  We’ve long since passed the point of be able to take what we like though – this year the local irrigators will get only 36% of the water they’re entitled to.  Nobody is happy, the farmers want more water to grow food and the ecologists want more water to keep the river healthy. Nobody knows how to solve this tug of war and with our climate becoming hotter and drier the consequences of the Murray dying, the river version of our Great Barrier reef – are unimaginable.

On our way home driving through Mallee wheat country we stopped at the Ouyen football ground to stretch our legs.  The kids played out front on the Big Mallee Root (that’s it down there).  The root is like a big game trophy; a nemesis defeated by our industrious farmers clearing the land for the wheat for which Ouyen is famous. 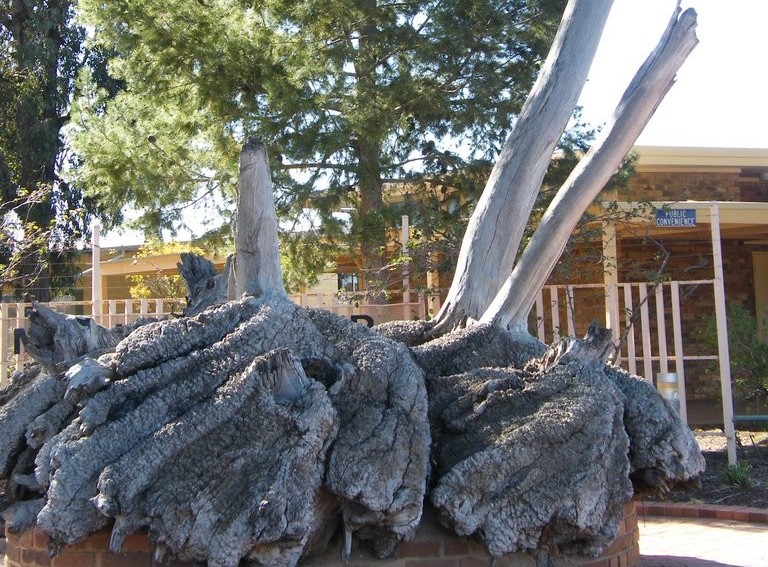 The giant bleached root got me thinking about another dark emu and another group of farmers who have lived in the negative space of our collective imaginations. Writer Bruce Pascoe recently revealed in his book Dark Emu Black Seeds  an advanced Aboriginal agriculture recorded by early explorers and settlers but never spoken of in the retelling of our European settlement.  Pascoe talks of starving explorer Charles Sturt being welcomed by a large wheat growing community in the Warburton Desert, being fed cake and roast duck and accommodated for several days in a comfortable lodge.

The stories are mind boggling; why didn’t I know that in this country we have 35,000 year old wheat grinding stones, granite silos and permanent farming settlements?  My reaction when it clicked that Australian Aboriginal farmers were growing, harvesting, storing and cooking millet flour 15,000 years before the emergence of farmers in the Mesopotamian fertile crescent was pretty standard, “Every person in Australia, no the world, should know this!  We should be erecting Big Mallee Root equivalents all over the place!”

But perhaps more than memorialising, more than righting historical wrongs, maybe this dark emu we’re seeing emerge out of our history’s negative space can help us.  Maybe becoming conscious of a culture that’s worked out intricate farming systems sustaining our country’s ecology over 1000 generations is worth looking at. I mean we’ve only been here 200 years and clearly, if we go on species extinction rates, we’re still learning.  So maybe there’s something in this, something that could help us learn to be farmers and Murray-savers at the same time. We’re innovators – maybe there’s an app in it.

Side note:  Late year, Pascoe – in collaboration with Aboriginal groups on the New South Wales South Coast and in East Gippsland, Pozible-funded a project to “support the recovery of our traditional food plants”.  He is also working with young members of the local Indigenous community in Mildura using native grains to produce bread.