In the past 165 years we’ve developed an oddly paradoxical culture (sorry) towards bacteria.  With the discovery of Germ Theory back in the mid 1800’s humans became aware that disease was passed on through bacterial infection.  Doing things like sterilising scalpels and washing our hands before cutting patients open and rummaging around inside of them became common practice. And although less than one percent of all bacteria caused sickness some clever soap marketers thought that if they got us believing all bacteria were potential killers (sounds uncomfortably like some recent immigration debates) then we would buy more soap.

And work it did. Scaring the bejesus out of everyone, especially parents, by demonising all bacteria was an incredibly effective way to sell a trolley-load of antibacterial cleaning products.  And so in the ensuing “war on bacteria” good parents were encouraged to purge homes of all bacteria, even the good ones, which, according to the Hygiene Hypothesis, has possibly caused our very clean children to suffer through a growing eczema and asthma epidemic.

But despite all the “bad bacteria” messaging something counter-intuitive began happening in kitchens and dinner tables around the country.  A sort of quiet, slightly fizzy revolution emerged out of our collective consciousness.  People started realising that many of the foods we loved were bacterially fermented and that, often through illness, these probiotic foods played an important role in keeping our bodies healthy.

Seemingly from nowhere fermented foods are now everywhere – I remember first seeing kombucha a few years ago on an episode of Portlandia.  They teasingly called itkampuchuchuchuchu tea – today its available in an array of flavours in every hip cafe drinks fridge across the country.  This rediscovered human/bacterial partnership has also been responsible for launching a slightly sour smelling wave of small businesses (many Fair Food has great joy supporting) – including Pat’s Veg, Powerkraut, The Fermentary, Dr Chan’s Tibicos, KombuchAID, Red Dragon and sauerkraut newcomer Soul Strength from Anglesea.

And though as common as they have become, fermented foods still have a slightly mysterious aura despite many of them, like sauerkraut*, being incredibly simple to make. Now we’re no Sandor Katz’s but this, if you’re keen, is how we make kraut at our place:

And if this kraut experience turns you on, perhaps you’d like to do a bit of fermenting with friends then check out Krautsaucing Day coming up this spring.

*Warning sauerkraut is a gateway ferment that may get you into hardcore fermenting – leading to a kitchen bench like the one pictured below. 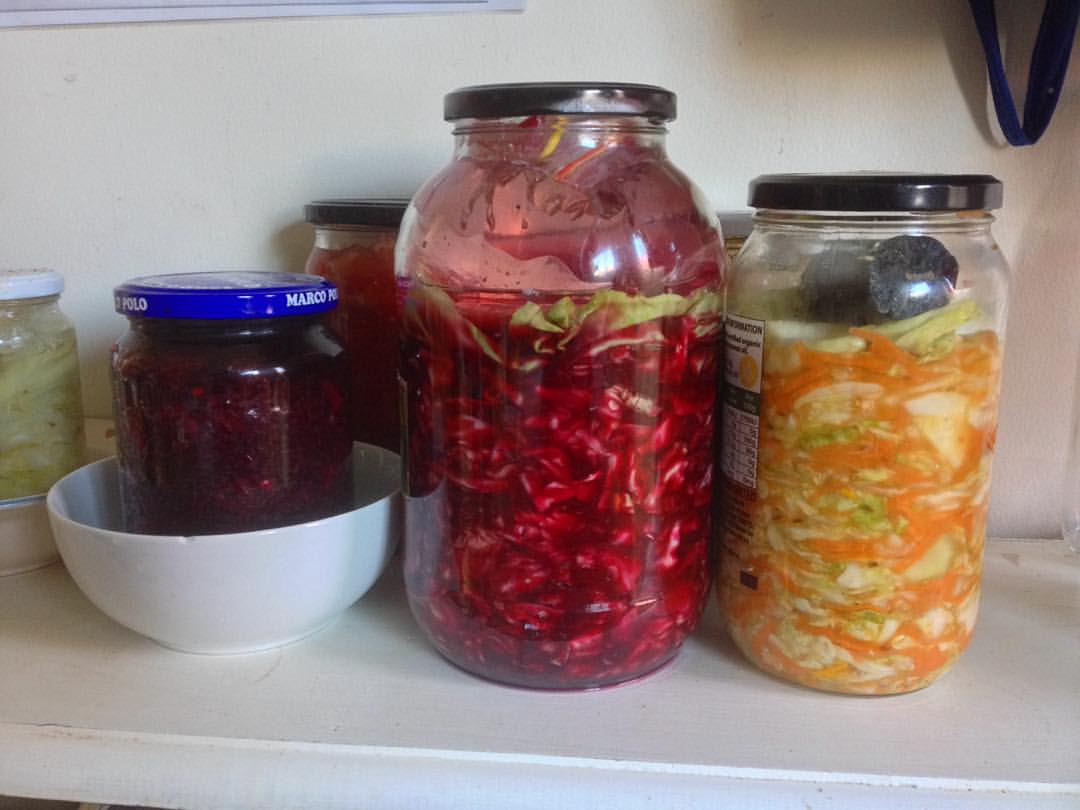