Some weeks the world lets you know you’re doing alright. Last Thursday it happened to our CEO Cinnamon Evans who took home the inaugural Mike Hill Environmental Sustainability Award in recognition of her 20 years of service at CERES.  That nod of recognition will be reinforced a little bit more this Thursday when Cinnamon speaks at the Global Social Economy Forum aka GSEF2016 in Montreal. 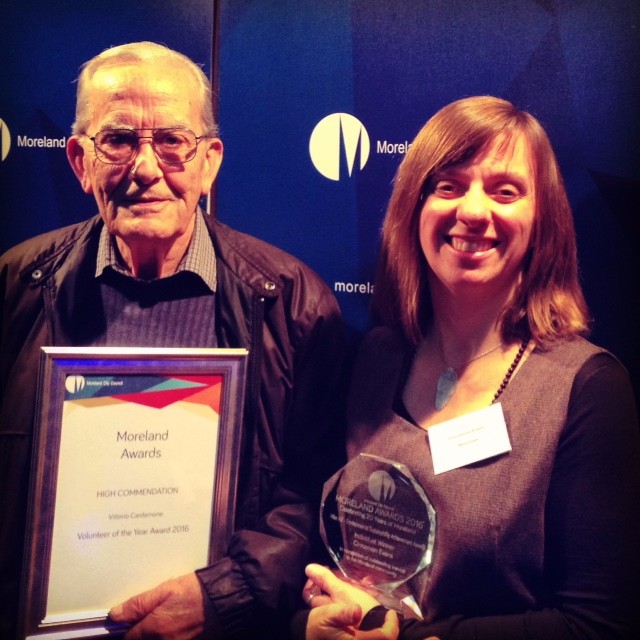 It isn’t, however, always awards and international speaking engagements for Cinnamon, in fact it hardly ever is. When you head up a beloved Melbourne institution like CERES, a place so many feel a sense of ownership over, the usual CEO fare is more of a balancing act working to keep community, partners, staff and board happy, informed, included.  And when this doesn’t happen the person they seek out is Cinnamon.

Twenty years ago when Cinnamon came to CERES to work as a teacher in the schools program (that’s Cinn above in the early 2000’s with kids and goats) her ability to organise and bring order to previously chaotic “systems” quickly became legendary, even spawning a verb “to cinnamonise” i.e. to organise to an extreme level.

It was this ability to manage the seemingly unmanageable that lead Cinn to the CEO’s role.  Taking over right in the middle of CERES’ own GFC moment Cinnamon had every right to run for the nearest exit – braver and saner souls surely would have.  But Cinnamon refused to give up on CERES and for 5 stressful years she dragged CERES out of a deep financial hole and back into the black. So this week Cinn, as you walk the city streets with a plate of Montreal’s best poutine, CERES and all those who sail in her take our hats off and salute you.

The pic above is Cinnamon Evans with CERES super-volunteer, Vic Cardamone at the Moreland Awards last week.