A few weeks ago in a newsletter I was digressing about the joy of discovering the cornucopia that’s depicted on our very own Victorian coat of arms. Seemingly mundane at first glance, on closer examination I was struck by its offbeat imagery; a  kangaroo levitating in a lavishly decorated medieval jousting helmet while two toga-clad ladies nonchalantly showed off olive leaves and various agricultural products in a style reminiscent of a stand at a fresh food expo on a slow day.    But beyond its offbeat wackiness there was something about this picture, something that’s been nagging away in the back of my mind for weeks now.

It was as our yearly harvest festival approached “that something”  finally clicked into place. I was thinking about the origins of our name CERES and had been revisiting a poem of Ovid’s sent to me by an old friend with a very expensive and esoteric education….

Ceres was the first
to split open the grassland with a ploughshare,
the first to plant corn and nurse harvests.
She was the first to give man laws.
Everything man has he owes to Ceres,
so now I sing of her
and so I pray my song may be worthy
of this great goddess
for surely she is worthy of the song. 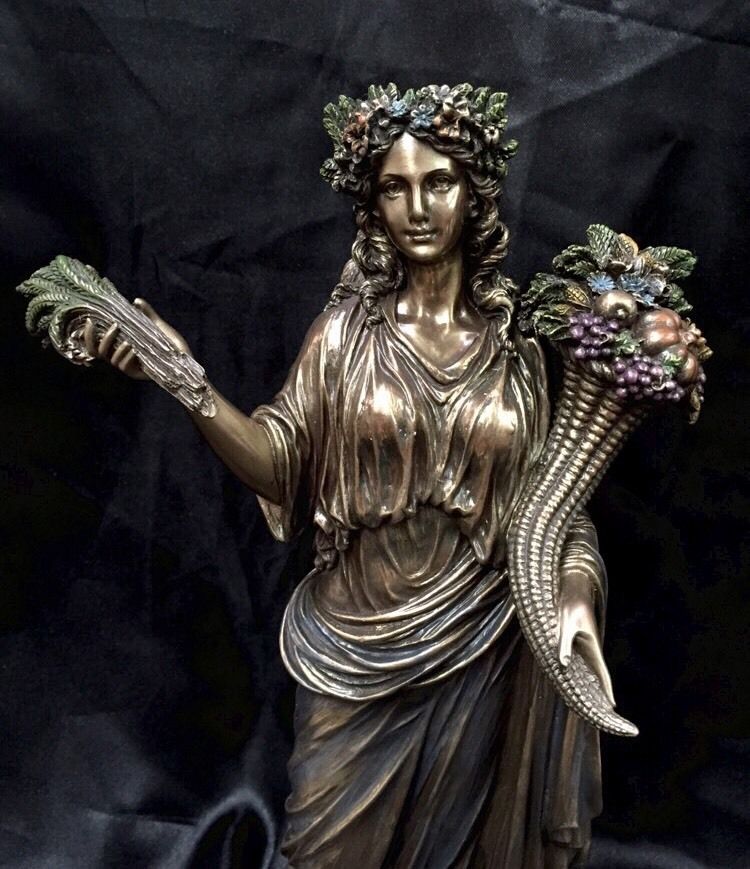 (that’s her down there, she’s going for $120 btw). Instantly everything came together. The eBay statue and the woman on the coat of arms!  They were the same!  It was Ceres, her head crowned with a wreath of wheat, her harvest spilling out of her cornucopia.  It was her right under my nose, all these years watching over us, the symbol of our state standing above that banner, proclaiming our  motto, Peace and Prosperity.

I suspect that back in the day the Peace and Prosperity motto alluded to the enforcement of laws upon local populations, both indigenous, convict and poor, so that “gentlemen of the Empire” were unhindered to take as much from Ceres as she would give.

But today, in another age, an age of climate change and with an ecology ready to crack,  Peace and Prosperity now requires us to care for Ceres – in fact more than care for her, to actually give back more than we take, so that future generations may follow us and tell their own stories of Ceres, celebrate their own harvests and draw their own funny coats of arms.

P.s.  Don’t forget this Saturday to share your surplus on “Put a zucchini on your neighbour’s doorstep” Day.

Have a great long weekend